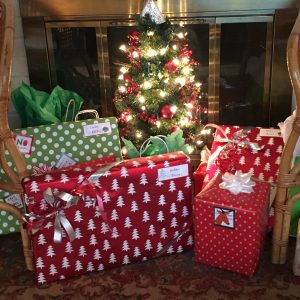 About ten years ago my two daughters and I started a tradition which has persisted to this day. We feel it has introduced more fun into our Christmasses; and we like it so much that we talk about it to anyone who’s interested. And quite a few who aren’t. We call it ‘Budget Boxmas’.

Do you remember Alvin Hall, the American financial guru and author? He presented several popular money advice series on BBC2, from 1999 and 2003, and he first opened my eyes to the insanity of the Christmas gift-buying frenzy.

One of the programmes featured a couple who had a combined income of around £70,000 but had got into serious debt. Alvin established that one of the reasons was an addiction with buying expensive Christmas presents, and not just for friends and family but also for neighbours, neighbours’ children, etc etc. They started Christmas gift buying every September, sometimes even earlier, and I think they spent around £10,000 every year.

So Alvin Hall did a little experiment: he asked the couple’s two sons what they thought was the best thing about Christmas Day. The Christmas dinner with the family was top of both lists; the decorations; singing carols; seeing friends, etc.

“What about the gifts from your folks?” prompted Hall, because neither of them had included the gifts in their lists of favourite things. “Oh yes, they’re nice too.”

Then Alvin talked to the neighbours. Only a week after Christmas, he asked a few neighbours, who’d received quite extravagant presents from this generous couple, if they could remember what they’d been given. Sadly, the answer was no.

That little experiment, harsh though it might have seemed, made the case for me that spending lots of money on Christmas presents was not necessary, despite the blandishments of the advertisers.

I moved to Bristol twelve years ago. My daughters used always to spend Boxing Day with me and Christmas Day with their mother, as she and I had divorced a few years before that. My cooking wasn’t in the same class as their mum’s; but the girls and I had lots of fun, with plenty of booze and plenty of songs, as they both love singing.

By the time they arrived at my place in Bristol on 26 December, the girls had already had lots of presents from their generous mother, their stepdad, grandparents and friends. They and I soon realised that what we all needed from Boxing Day (or Boxmas, as they started calling it) did not need to involve more expensive presents, some of which might be duplicated.

So we came up with an idea – actually it wasn’t mine, it came from a friend of mine. She and her kids had set a spending limit of £10, so we decided to do the same. However the details were not clearly agreed in advance, so I took it to mean you mustn’t spend more than £10 per item. The girls thought it meant £10 per person, which of course was far more logical.

So from the second year onwards we got our act together and the £10 per person limit applied. The result was an increase in creative thought around the gift buying process. Instead of simply throwing money at the problem, we became patrons of Poundland and of charity shops; also we would recycle gifts and we would make stuff. The girls became particularly good at making what they still call mix-tapes, although they are of course CDs nowadays.

Our thinking behind this ‘Budget Boxmas’, as we call it, was this: so often one receives gifts that one didn’t really want and certainly didn’t need. We are not on the edge of poverty but we don’t believe in wasting money. Good food and drink and each other’s company (and maybe singing) are the essentials of the festive season for us. Our musical hero Loudon Wainwright calls Christmas a “Retail Eternity” and this is our small rebellion against that. Of course our presents are in monetary terms trivial but we know that thought has gone into them.

Did you get anything that you didn’t want or need? You just give it to a charity shop … perfect!

… and book: Your Money Or Your Life http://amzn.to/2gRRJ0L

My book Back to the Black … how to become debt-free and stay that way: http://amzn.to/2gHQzlc