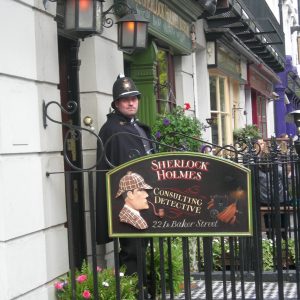 Image by hknong via Morguefile

Sherlock Holmes is wrestling with a difficult problem at 221B Baker Street. So problematic, in fact, that he sends an urgent summons for help to Detective Inspector Lestrade. As Lestrade arrives – with a full backup team, having left a crime in progress – Holmes, played by Benedict Cumberbatch on BBC-TV, holds up a slim book entitled How to Write an Unforgettable Best Man Speech. “This is hard,” he says. “The hardest thing I’ve ever had to do.”

If you should ever need to do that “hardest thing” and make a best man’s speech, don’t rush out to your favourite bookstore, be it Amazon or bricks-and-mortar, to find a copy of that book. Sadly, it doesn’t exist. (I say sadly, because that episode of Sherlock went viral and it would have been a fantastic piece of product placement.)

A good friend told me that it would be an interesting exercise to analyse that now-famous speech, and I’ve decided to ask my readers for their opinions on it … and on other wedding speeches on screen, both TV dramas and feature films.

There are of course millions of real wedding speeches now on YouTube but I’m looking for fictional ones, because I believe that their lessons are more easily remembered. Benedict Cumberbatch, as Sherlock, has millions of fans (aka Cumberbitches), but that’s not the only reason for writing about his now-famous but fictional speech.

The other reason is that the latest series of the drama has just finished on BBC TV – personally I didn’t like the way they developed this last series but that’s just my opinion, though I know I am not alone – so maybe you fans are suffering withdrawal symptoms.

The Sign of Three: solve a crime or two, write a speech

This speech came, as any Sherlock fan will tell you, in an episode called The Sign of Three, broadcast in 2014. Sherlock has been invited to be Dr Watson’s best man, to his surprise and confusion. Simply writing it is, as he tells D.I. Lestrade, “the hardest thing I’ve ever had to do.”

So here’s the survey. What do you think of Sherlock’s speech? If you were planning a best man’s speech, what lessons, if any, would you take from it?

Here is a link to a video of the speech, via our old friends at YouTube:

That link takes you to almost the full speech, apart from a section at the beginning where Sherlock reads out the messages from absent friends; or, as he says: “First things first: telegrams! Well, they’re not actually telegrams; we just call them telegrams. I don’t know why. Wedding tradition, I suppose. Because apparently we don’t have enough of that already.”–

This is all fiction, of course; but I think there are some useful lessons that can be learned from it. Do you agree? If so, what are they? And what do you think about what he does at the very start – reading the so-called ‘telegrams’ – which isn’t in this video?

If you want to see that part too, the only version I found on YouTube isn’t of great quality and has subtitles in Dutch; but here it is.

And for a final piece of background, here’s a transcript of an interview with Steven Moffat, who was Executive Producer of the Sherlock series and who wrote the speech, talking about this episode. He says he always wanted to see Sherlock as a best man. (That idea was his, not Conan Doyle’s:  in the original novels, Watson marries Mary Morstan between stories, off-screen so to speak). Moffat’s thoughts are very instructive.

That episode of Sherlock? It’s called The Sign of Three.

Other fictional wedding speeches from movies and TV dramas? I’ll be posting in coming weeks about other onscreen speeches. Watch this space!