[Want to know how Judi Dench responds to fear? You’ll have to read to the end of the post. Sorry about that. A cheap trick, I know] 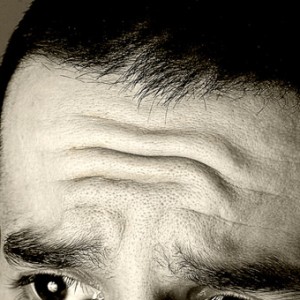 A while ago, I was interviewed for a website called Creatives Hub. The site owner, Richard Lalchan, quizzed me first about my life and previous career but then asked some very perceptive questions about my coaching for speakers.

The toughest was this:

My first reply to Richard was something like this: “Good question! I’ve never been asked that before.” (See what I was doing there? I was buying a little time, while I tried to work out an explanation that might make sense to him; and maybe even to me.)

At the end of those few seconds, here’s what I came up with. To be precise, here’s what I said then, plus some thoughts I’ve had since doing that interview.

[It is work in progress; and I would welcome input from anyone who has a better explanation than I do.]

As the poet says: “Mother nature is a clever girl” (actually, it’s a song, not a poem: see the foot of this post if you don’t believe me). She knows that our conscious minds can hold only one thought at a time; but that there are infinite numbers of thoughts submerged in that massive database of our mind that we call the subconscious or unconscious. (Let’s say it is the submerged six-sevenths, because I like the iceberg analogy) Those thoughts are theoretically available to be called up onto the monitor of our conscious mind (OK, another analogy: I don’t care).Sometimes they don’t come up when we need them. What’s worse, sometimes they pop up when we don’t need them and actively don’t want them.

When we perceive a threat, that ‘clever girl’ Mother Nature has equipped our bodies to produce adrenaline, which is a hormone and neurotransmitter and is the instigator of the so-called ‘fight or flight’ reflex. If you’d lived 20 million years ago and you met a sabre-toothed tiger for the first time, and if nobody in your tribe had seen or heard of them, you might not at first perceive it as a threat (although its appearance should have been a clue). So you might be standing there saying “here, kitty!” until the moment the tiger ate you for breakfast.

They didn’t have the internet then; but if any of your friends or family had witnessed the event, the story would spread very fast (Offline, of course). So the next time a tribe member saw a tiger, they would perceive it as a threat; adrenaline would kick in, they would know instantly (without taking time to process the info) that they needed to fight the beast or get the hell out of there.

Fast-forward to modern times. You’re about to cross the road and a bus comes round the corner at high speed. Even if you’ve never been attacked by a bus before, you know enough about them to know this is a threat. Instantly, again, you jump out of the way. Importantly, that adrenaline gives you the extra energy to do it faster than you normally would. Again, you don’t waste time having an internal discussion; this adrenaline stuff seems to give you speed as well as strength.

You might perhaps be thinking: that’s all very interesting about tigers and buses and stuff; but what has it got to do with public speaking? Well, if you’d never spoken in public and had never heard anything about it, you would be in the same situation as the first caveman who misunderstood the sabre-toothed tiger’s smile. You would not perceive a threat. But if you’ve done it before, you know that if anything goes wrong it is observed by other people, hence your feeling of self-worth takes a big hit. Also, you might have heard that others consider it a major threat. So now it’s a sabre-toothed tiger for you; major anxiety.

Adrenaline as a friend?

I think of this adrenaline rush as my friend when I am speaking, because it provides me with the energy boost to give a performance. The way I see it, adrenaline enables my brain to be fractionally ahead of my mouth, so I’m preparing the next sentence before I get to it.

The issue is this: I can accept, and even welcome, that adrenaline rush at the right time; but not three months before, when I’m booked to speak.

How Muhammad Ali, and thousands more sportspeople, have handled the challenge of untimely pre-event anxiety, I plan to deal with in future posts. In other words: how to make that tiger your friend at the right time but lock him up in his cage until the big day, so that speaking opportunities produce excitement but not fear.

Our National Treasure Judi Dench was interviewed for the BBC Radio 4 programme Desert Island Discs broadcast a couple of weeks ago.

At the start, presenter Kirsty Young in her introduction quoted something Judi had said about fear: “Fear generates a huge energy. You can use it. When I feel that mounting fear, I think: Oh yes, there it is! It’s like petrol.”

In the same interview she added that it got worse the longer you do it, because you recognise the pitfalls. Back to my sabre-tooth tiger analogy.

Oh, and by the way, the world-famous and Oscar-winning Judi Dench fears public speaking far more than acting. So if you too fear speaking, you are not alone. But just remember what she says: it’s like petrol.

A hormone and a neurotransmitter.

An adrenaline rush is the fight or flight response of the adrenal gland, in which it releases adrenaline (epinephrine). When releasing adrenaline, one’s body releases dopamine which can act as a natural pain killer. An adrenaline rush causes the muscles to perform respiration at an increased rate improving strength.

(sorry, but if you live outside the UK you might not be able to access this programme)

“Mother nature is a clever girl”

(Secondary source: yours truly. I wish I had remembered my chemistry studies as well as I remember song lyrics.)