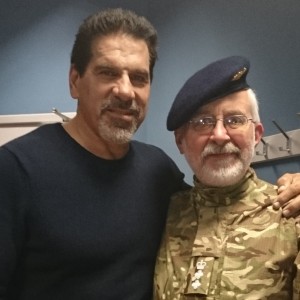 A movie shoot in Bristol

I’ve just been knocked out by The Incredible Hulk. In more ways than one. Both literally – and that’s something for my acting résumé, surely – and metaphorically, by meeting the phenomenon in person and seeing what a nice guy he is.

How did this happen, I hear you cry. Well, I was recently cast in a feature film for the first time. Lightworx Media is a Bristol-based TV, film and video production company for which I’ve made a couple of commercials in the past. Their genial boss, Andrew Dymond, asked me recently to audition for a role in a movie starring Lou Ferrigno, aka The Incredible Hulk, to be shot in Bristol. It was a featured role; admittedly, a small one, as Colonel Neal. I got the part; and we’ve been filming over a four-week period with a very friendly and very large team, including over 100 extras and stunt-men for the fight scenes. A wonderful atmosphere on set, despite all the hanging-about that is an inevitable feature of film-making.

We were shooting in many locations around Bristol and without risking a plot spoiler I can tell you the final fight scenes (there were many) were filmed on and around the Thekla, moored in the harbour. The film’s title is Instant Death; the title is appropriate. It’s scheduled for release in autumn 2016.

In one early scene, I am knocked out by The Hulk. But I am glad to reassure you that no middle-aged actors were injured in the making of the scene, as the very helpful stunt coordinating team (a very busy team in this movie) had put down crash-mats for me.

The metaphorical knockout, which mentioned at the start, was to see what an unassuming, genuine guy Lou Ferrigno is. He treated everybody the same way (isn’t that one definition of a gentleman?) and was never too busy for a photo or an autograph. I talked to lots of the supporting artists, including many martial-arts specialists who’ve been extras in lots of movies; they’d come from all parts of the country to be in this one because of the reputations of Ferrigno and of the director Ara Paiaya, who is best-known for martial-arts films. Everyone had a good word to say about Lou. (as I call him, now that we are big buddies of course)

Stewart Lee and The Incredible Hulk

Here’s a coincidence. It might not seem so to you; but it did to me. I’m a massive fan of the standup comedian Stewart Lee. And since I recently bought a  so-called ‘smart TV’ (it’s smarter than me, anyway) I’ve discovered the beauty of watching YouTube clips in all their glory on a large screen (smaller than yours, I’m sure , but 32” is big by my standards).

Totally by chance (this is the spooky bit), five minutes before I got the call from Andrew Dymond offering me the part in this movie, I had watched a Stewart Lee routine in which he did a whole riff about The Incredible Hulk, a subject in which he seems to be a major expert. I wasn’t any kind of expert and it was the first time I had heard mention of The Incredible Hulk in a long time. Five minutes later came the phone call from Andrew Dymond of Lightworx. Spooky, eh? Well, I thought so.

The rest is history for my burgeoning movie career. Watch this space.